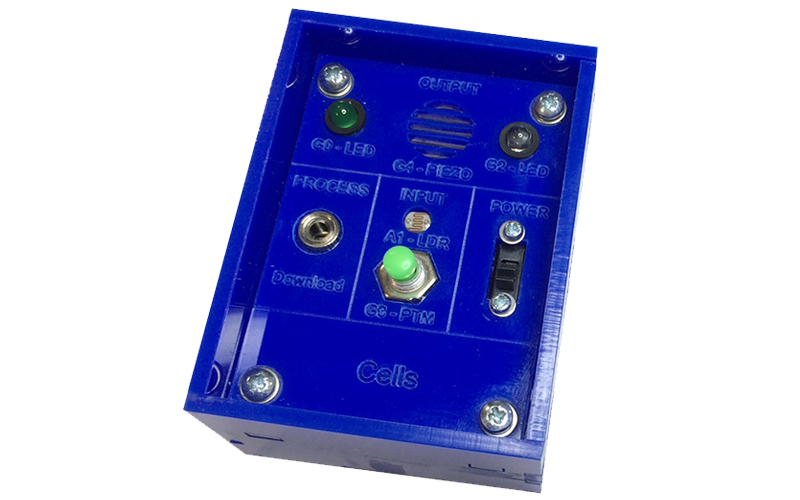 There are 12 different programming challenges, each a little harder than the one before it. You're not expected to complete them all (although if you can, you should take GCSE Design Engineering!).

The below video is an introduction to Circuit Wizard and flowchart programming - it does not go through the programming challenges.

a: Bike light. Make a program that causes the LED lights to alternate on and off once a second when the unit is turned on.

b: Momentary LED torch. Make a program where holding down the button causes the LEDs to illuminate, and releasing it turns them off.

c: Toggle switched LED torch. Change the program so that the LEDs come on when the button is pushed once, and are turned off when pushed a second time.

e: Night light. Write a program for the box that causes the LEDs to illuminate when it gets dark.

f: Night light Mk II. Modify your program so that your night light can also be turned on and off by the PTM switch.

g: Music box. When the button is pushed, Happy birthday plays and the red LED is illuminated. When pushed while the LDR is covered, a different tune is played, and the green LED comes on.

h: Music box Mk II. The piezo plays a tone which goes up and down in response to the current light level. Even better, if the button has to be held down at the same time.

i: Personal alarm. Write a program that will make the piezo siren beep, and the LEDs flash on and off when the button is held down for 3 seconds.

j: Book alarm. The user places an object on top of the program box (so the LDR is in the dark). When the object is removed, the piezeo siren sounds and the LEDs to flash.

k: Free choice. Write your own program to utilise all the inputs and outputs, and write a short description of what it does.

Final challenge: Write a program to control an alarm which (when armed) sits inside a cupboard or drawer, and goes off when it detects the drawer has been opened. It should work as follows:

NOTE: The audio and video are about 5s out of sync in the challenge E video - it does show you a solution, though!